My first thought as the truck came hurtling towards me was “I’m going to die.” As metal screeched and the windshield cracked, I closed my eyes and then… Nothing. The truck had stopped, smoke hissing.

My first thought as the truck came hurtling towards me was “I’m going to die.” As metal screeched and the windshield cracked, I closed my eyes and then… Nothing. The truck had stopped, smoke hissing.

Luckily it clipped two cars, removed a traffic light and knocked over a street pole before landing on my Yaris. That’s when I finally moved, terrified the roof was going to collapse and trap me under the truck. I undid my seatbelt and climbed over the passenger seat as fast as I could.

I smelled the sweet slickness of oil running down the road. My legs wobbled and fell out from under me. A stranger helped me up. 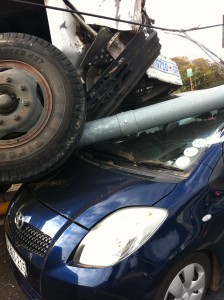 It’s very unsettling to realise you’re alive when you were about to become another statistic. I feel like someone was watching over me. I’m also grateful for street poles and amazing Toyota manufacturing. Watching my wonderful little Yaris being towed away made my heart hurt – I’ll probably never see her again. 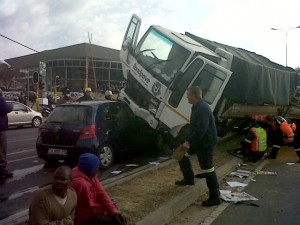 My poor Yaris. It saved me.

Impact-wise, my back’s a little stiff from tensing in shock and my stomach hurts from nerves, but otherwise I’m miraculously well; unlike the worker in the back of the truck who was bleeding and carried off on a stretcher.

I’m pretty sure the truck’s brakes failed. It was a dilapidated piece of crap that shouldn’t have been on the road. 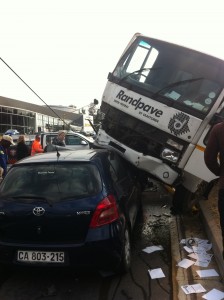 Life is fragile. I never understood that until now. You can be innocently waiting at a red light and a one-tonner will come plowing across the intersection, over the traffic island and straight into you. Which is why I’m now eating a slab of Dairy Milk chocolate in bed.