I wrote this a year ago on my old blog. I think it’s worth sharing again in the lead up to a new blog feature I’ll be introducing...

When my best friend and I were 13, we dreamed of sharing a big house with a menagerie of mutts. Toy poms and huskies for her, golden retrievers and ridgebacks for me.

Last night we watched Marley & Me … Two of the most unsentimental 27 year-old women on the planet sniffling away in the cinema, our hearts aching for the dogs we’ve loved.

I desperately scratched in my bag for the one tissue I had. I held it up and carefully tore it in half, handing the other piece to Leanne. We looked at each other and laughed at ourselves through snotty tears. Leanne said to me afterwards, “The movie must’ve been sadder for you. Marley looks like Prince.” 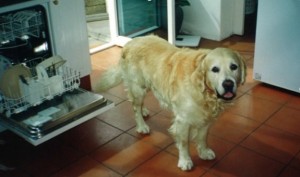 Prince (aka The Dog Formerly Known As Slobber Chops) was my childhood dog, a gorgeous golden retriever with soft fur and the patience of a mother.

I was eight and my brother five when we brought Prince home. Dad grumbled about paying R300 for a dog, but Mom insisted retrievers were good with children. As always, my mother was right.

Why all kids (& moms) should have a dog like Prince:

Prince died just before my 21st birthday. That’s 13 years of unconditional love and memories that inform my childhood. How many people can you say that about?

3 thoughts on “The dog that ate Vaseline Intensive Care Cream”